Today marks the beginning of the Philadelphia Flower Show, a gala show traditionally, as far as flower shows go, but this year they have totally outdone themselves by featuring tropical flowers from the aloha state of Hawaii. If you grow tropicals as a business and live on Kauai, this is an event you have been preparing for all year. Watering, fertilizing and thinning stands of flowers so that they could be picked by the thousands last Saturday, packed in a driving rainstorm on Sunday and shipped to the show Monday to be a part of an event unlike any in floral history.

Protea picked in Kokee for the flower show.

As a member of the Hawaii Flower and Foliage Association Kauai. I joined our other members including secretary Kathy Offley and president Johnny Gordinas who are my neighbors, picking, cleaning and packing thousands of flowers for the show. Each flower had to be cut and cleaned to perfection so that there was not even an ant remaining or the whole shipment could have been rejected by agriculture inspection. I watched in awe as Johnny and Kathy cleaned and trimmed flowers with lightening speed and placed them in the ever growing buckets of water in Kathy’s walkway. All day last Saturday and early Sunday morning the flowers kept arriving until the area was exploding in color. Protea from Kokee led the pack in beauty and distinction not to be outdone by the gorgeous bee hives in light peach and dark honey, tropic fleur, antherium and a multitude of others.

I picked my flowers Saturday afternoon, hurriedly, during a break in the rain. Tropic fleur, red and pin torch gingers, all I hoped destined to the greatest Hawaiian tropical flower show ever. Kathy had told me the torches, while beautiful, might not make the cut, as weight and their longevity made them a risky flower to count on. When I dropped off my flowers, I could not believe how many thousands had already arrived and we were still missing flowers from some of the bigger growers. It became obvious to me that the designers from our association destined for Philly were going to be creating some over the top beautiful arrangements for sale to America at the show. In that moment I realized that many people attending probably have never even seen some of these exceptional flowers and imagined their delight at feasting their eyes on the glory of Kauai’s tropical beauties. There were flowers there I had never even seen before. I was transported by their sheer beauty and quantity!

The Hawaiian Flower and Foliage Association Kauai left for Philly at noon on Wednesday. After arriving they had to spend Thusday unpacking and placing 12,000 stems of flowers and 4,000 pieces of foliage into water and position them so that they could be used to make arrangements for the show. A brutal day for sure for the already stressed members! Today they are creating arrangements with lightening speed, for we envision thousands of eagerly waiting buyers.

The flowers of Kauai on sale in the Hawaii market place at the Philadelphia flower show.

The Hawaii: Islands of Aloha themed Philadelphia International Flower Show (#FlowerShow on Twitter) is known to attract 30,000 people from accross the nation each day from March 4 to March 11, 2012. I have been watching my friend Bill Schaffer’s Facebook site (thank God for social media) and I’m totally amazed at the video of the active volcano he and his finance Kristine Kratt constructed for the flower competition out of 5,000 mostly red flowers including 2,000 antheriums! You have to see this to believe it. Using tropical flowers to create art will be a wave of the future I am sure. Of course they won first place! These popular and talented flower artists were present on Kauai for the Kauai Farm Fair last August to learn about tropical flowers and the culture of Hawaii for their role in this year’s show. Their active volcano not only showcases their huge talent but demonstrates they did their homework. On Wednesday they will get married at the show in front of thousands of their fans.

What a great day for Hawaii, this flower show will promote our state as a beautiful place to visit, full of flowers of aloha as well as assist our flowers growers, designers and florists!

To watch live broadcasts of the show you can go to 6abc.com. They have a live video-cam going and are showing lots of great footage. I have been watching some captivating videos. The booths are so beautiful, high tech and unbelievably original. I urge you to follow the show on Twitter at #FlowerShow also on Monday at #GardenChat, you will not be disappointed but awe struck by what you see.

The flowers of Kauai have arrived! Stay tuned for updates. The show just opened today!

More of my articles about the Philadelphia Flower Show. Would love to hear from you about your experiences or thoughts about the show. 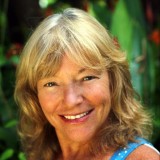